In my opinion, over the last few years there hasn’t been many smartphones that have really brought any outstanding feats to the party. All we’ve really seen is the obvious camera improvements, some slight CPU upgrades and a few software features. However I do have my eyes on 2 particular models in 2020 & heres why.

Apple’s original iPhone SE (in my opinion) probably one of the best phones Apple has ever made. But production was stopped in September 2018. Why? i don know. This phone was cheap, reliable, strong, and relatively simple to perform data recovery on. On the 20th April 2020 Apple released the new iPhone SE.  It seem’s they’ve continued with the use of an LCD, rather than an AMOLED display, which should keep the cost of repair down. Initially it may be expensive which is normal, but we can expect that price to drop over time. In terms of data recovery – if it keeps the modern design structure that apple is implenting in their newer models then i would expect data recovery to be a rather painful process, but still possible.

Pixel’s smartphones have been a real competitor for Apple over the last few years.  The first few pixel models had a few design flaws with them that seemed to show up in about 30% of cases but overal they were a great phone. The pixel 4 has really blown a hole in the market lately, with an incredibly simple android experience, with an AMOLED display whilst keeping the cost of repair cheap.  The pixel 5 is set to be a real eye opener & im keen to see what they come up with.

I’ve personally used one of these for a bit and these things blow me away. Microsofts really been the only one’s capable of producing a tablet that replaces a PC, with the surface book being the best by a long shot. This thing is amazingly fast, the display is brilliant – no wait, the whole design is just sexy. However you may need deep pockets, as you can expect to pick one of these things up from $2000-4800 depending on which model you choose. 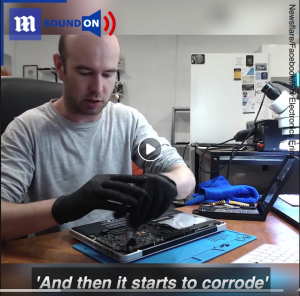 Water damage in mobile phones is on the rise on the Central Coast, causing significant grief in lost photos, messages, contacts and apps as well as big repair or replacement costs, according to a local repairer.  Local repairer & data recovery specialist Ben Nash from iFix Electronics in Erina has seen an increasing trend in unnecessary damage and data loss due to water damage. “A water damaged phone results in a lot of tears. When people realise that they’ve lost photos, apps, messages and documents many experience real devastating loss” said Ben Read More...

Iconic One Theme | Powered by Wordpress